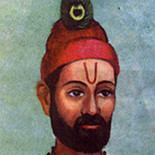 Kabir’s legacy is today carried forward by the Kabir Panth (“Path of Kabir”), a religious community that recognizes him as its founder and is one of the Sant Mat sects. Its members, known as Kabir panthis, are estimated to be around 9.6 million. They are spread over north and central India, as well as dispersed with the Indian diaspora across the world.

Kabir composed in a pithy and earthy style, replete with surprise and inventive imagery. His poems resonate with praise for the true guru who reveals the divine through direct experience, and denounce more usual ways of attempting god-union such as chanting, austerities, etc. Kabir, being illiterate, expressed his poems orally in vernacular Hindi, borrowing from various dialects including Avadhi, Braj, and Bhojpuri. His verses often began with some strongly worded insult to get the attention of passers-by.

ARE YOU LOOKING FOR ME?
Kabir

Are you looking for me?
I am in the next seat.
My shoulder is against yours.
You will not find me in stupas,
not in Indian shrine rooms,
nor in synagogues,
nor in cathedrals: not in masses,
nor kirtans,
not in legs winding around your own neck,
nor in eating nothing but vegetables.

When you really look for me,
you will see me instantly—
you will find me in the tiniest house of time.
Kabir says: student, tell me,
what is God?

Look
what happens to the scale
when love
holds it.