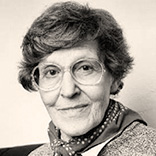 She was born in Birmingham, and with a scholarship, studied English literature at St Hilda’s College, Oxford (1950). Her poems were first published when she was at university in the early 1950s. She became a journalist and worked for the Bedfordshire Times, the Oxford Mail and Drum Publications (Johannesburg, South Africa).

Joseph’s best known poem, “Warning”, was written in 1961 and is included in her 1974 collection Rose In the Afternoon and The Oxford Book of Twentieth Century English Verse. “Warning” was identified as the UK’s “most popular post-war poem” in a 1996 poll by the BBC. The second line was the inspiration for the Red Hat Society. Her first book of poems, The Unlooked-for Season won a Gregory Award in 1960 and she won a Cholmondeley Award for her second collection, Rose in the Afternoon in 1974.

When I am an old woman I shall wear purple
With a red hat which doesn’t go, and doesn’t suit me.
And I shall spend my pension on brandy and summer gloves
And satin sandals, and say we’ve no money for butter.
I shall sit down on the pavement when I’m tired
And gobble up samples in shops and press alarm bells
And run my stick along the public railings
And make up for the sobriety of my youth.
I shall go out in my slippers in the rain
And pick flowers in other people’s gardens
And learn to spit.

You can wear terrible shirts and grow more fat
And eat three pounds of sausages at a go
Or only bread and pickle for a week
And hoard pens and pencils and beermats and things in boxes.

But now we must have clothes that keep us dry
And pay our rent and not swear in the street
And set a good example for the children.
We must have friends to dinner and read the papers.

But maybe I ought to practice a little now?
So people who know me are not too shocked and surprised
When suddenly I am old, and start to wear purple.

For this ring upon my finger
You take the finger.
With the finger you take the hand
And all the winters it was cold as a child;
With the hand you take the arm
And all it has encircled and supported
That now encircles you.
With the arm, the shoulder, and he ache in it;
The neck, stiff, and of a stiff-necked people,
And the soft white throat and the hands that have caressed it.

On the neck this head and its thick hair
And under this thick hair troublous thoughts
The mind that will not let be, nor let you be,
Woven and packed full of twenty-eight years
Which have this day for zenith as one summary.
And with your hand beneath my breast you take
The pumping heart that will not let me be,
And bangs to the sound of traffic, and the hips,
To deaths, arising, blindness and betrayals
And will not hood the eyes to tell them morning
Is present in the nightmare, or day the dark,
Yet louder than the trumpets says “I will”
Over the grey and curling negatives
Rattling before us in the midday sun.
This day we take each other’s past and all things
Hateful and marvelous to this moment,
The point of the pyramid on which you slip
The ring to hold
The broad base, and all our future in it.