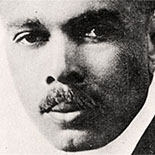 Johnson is remembered best for his leadership within the NAACP, as well as for his writing, which includes novels, poems, and collections of folklore. He was also one of the first African-American professors at New York University. Later in life he was a professor of creative literature and writing at Fisk University.

And God stepped out on space,
And he looked around and said:
I’m lonely–
I’ll make me a world.

And far as the eye of God could see
Darkness covered everything,
Blacker than a hundred midnights
Down in a cypress swamp.

Then God reached out and took the light in his hands,
And God rolled the light around in his hands
Until he made the sun;
And he set that sun a-blazing in the heavens.
And the light that was left from making the sun
God gathered it up in a shining ball
And flung it against the darkness,
Spangling the night with the moon and stars.
Then down between
The darkness and the light
He hurled the world;
And God said: That’s good!

Then God himself stepped down–
And the sun was on his right hand,
And the moon was on his left;
The stars were clustered about his head,
And the earth was under his feet.
And God walked, and where he trod
His footsteps hollowed the valleys out
And bulged the mountains up.

Then he stopped and looked and saw
That the earth was hot and barren.
So God stepped over to the edge of the world
And he spat out the seven seas–
He batted his eyes, and the lightnings flashed–
He clapped his hands, and the thunders rolled–
And the waters above the earth came down,
The cooling waters came down.

Then the green grass sprouted,
And the little red flowers blossomed,
The pine tree pointed his finger to the sky,
And the oak spread out his arms,
The lakes cuddled down in the hollows of the ground,
And the rivers ran down to the sea;
And God smiled again,
And the rainbow appeared,
And curled itself around his shoulder.

Then God raised his arm and he waved his hand
Over the sea and over the land,
And he said: Bring forth! Bring forth!
And quicker than God could drop his hand,
Fishes and fowls
And beasts and birds
Swam the rivers and the seas,
Roamed the forests and the woods,
And split the air with their wings.
And God said: That’s good!

Then God sat down–
On the side of a hill where he could think;
By a deep, wide river he sat down;
With his head in his hands,
God thought and thought,
Till he thought: I’ll make me a man!

Up from the bed of the river
God scooped the clay;
And by the bank of the river
He kneeled him down;
And there the great God Almighty
Who lit the sun and fixed it in the sky,
Who flung the stars to the most far corner of the night,
Who rounded the earth in the middle of his hand;
This great God,
Like a mammy bending over her baby,
Kneeled down in the dust
Toiling over a lump of clay
Till he shaped it in is his own image;

Then into it he blew the breath of life,
And man became a living soul.
Amen. Amen.

Eternities before the first-born day,
Or ere the first sun fledged his wings of flame,
Calm Night, the everlasting and the same,
A brooding mother over chaos lay.
And whirling suns shall blaze and then decay,
Shall run their fiery courses and then claim
The haven of the darkness whence they came;
Back to Nirvanic peace shall grope their way.

So when my feeble sun of life burns out,
And sounded is the hour for my long sleep,
I shall, full weary of the feverish light,
Welcome the darkness without fear or doubt,
And heavy-lidded, I shall softly creep
Into the quiet bosom of the Night.