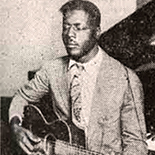 While the lyrics of his songs were often religious, his music drew from both sacred and blues traditions and is distinguished by his powerful bass thumb-picking and gravelly false-bass voice, with occasional use of a tenor voice.

“Dark Was the Night, Cold Was the Ground“ is a gospel-blues song written and performed by American musician Blind Willie Johnson and recorded in 1927. The song is primarily an instrumental featuring Johnson’s self-taught bottleneck slide guitar and picking style accompanied by his vocalizations of humming and moaning. It has the distinction of being one of 27 samples of music included on the Voyager Golden Record, launched into space in 1977 to represent the diversity of life on Earth. “Dark Was the Night, Cold Was the Ground” was chosen as the human expression of loneliness. The song has been highly praised and covered by numerous musicians and is featured on the soundtracks of several films.