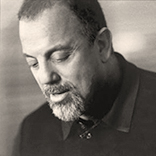 William Martin “Billy” Joel (born May 9, 1949) is an American pianist, singer-songwriter, and composer.

Joel had Top 40 hits in the 1970s, 1980s, and 1990s, achieving 33 Top 40 hits in the United States, all of which he wrote himself. He is also a six-time Grammy Award winner, a 23-time Grammy nominee and one of the world’s best-selling artists of all time, having sold over 150 million records worldwide. He was inducted into the Songwriter’s Hall of Fame (1992), the Rock and Roll Hall of Fame (1999), and the Long Island Music Hall of Fame (2006). In 2008, Billboard magazine released a list of the Hot 100 All-Time Top Artists to celebrate the US singles chart’s 50th anniversary, with Billy Joel positioned at No. 23. With the exception of the 2007 songs “All My Life” and “Christmas in Fallujah”, Joel stopped writing and recording popular music after 1993’s River of Dreams, but he continued to tour extensively until 2010.

AND SO IT GOES
Lyrics by Billy Joel

In every heart there is a room,
a sanctuary safe and strong,
to heal the wounds
from lovers past,
until a new one comes along.

i spoke to you in cautious tones
you answered me with no pretense,
and still i feel
i said too much
my silence is my self defense.

and every time i’ve held a rose,
it seems i only felt the thorns,
and so it goes, and so it goes
and so will you soon i suppose
but if my silence made you leave
then that would be my worst mistake,
so i will share this room with you
and you can have this heart to break.