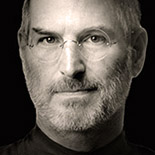 Steven Paul “Steve” Jobs (February 24, 1955 – October 5, 2011) was an American entrepreneur, marketer, and inventor, who was the co-founder (along with Steve Wozniak and Ronald Wayne), chairman, and CEO of Apple Inc.

Through Apple, he is widely recognized as a charismatic pioneer of the personal computer revolution and for his influential career in the computer and consumer electronics fields, transforming “one industry after another, from computers and smartphones to music and movies”. Jobs also co-founded and served as chief executive of Pixar Animation Studios; he became a member of the board of directors of The Walt Disney Company in 2006, when Disney acquired Pixar. Jobs was among the first to see the commercial potential of Xerox PARC’s mouse-driven graphical user interface, which led to the creation of the Apple Lisa and, a year later, the Macintosh. He also played a role in introducing the LaserWriter, one of the first widely available laser printers, to the market.

Jobs received a number of honors and public recognition for his influence in the technology and music industries. He has been referred to as “legendary”, a “futurist” and a “visionary”, and has been described as the “Father of the Digital Revolution”, a “master of innovation”, “the master evangelist of the digital age” and a “design perfectionist”.