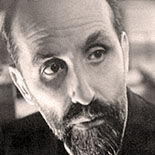 We were alone together
a moment on the balcony.
Since the lovely morning
of that day, we were sweethearts.

—The drowsy land around
was sleeping its vague colors,
under the gray and rosy
sunset of fall.

I told her I was going to kiss her;
she lowered her eyes calmly
and offered her cheeks to me
like someone losing a treasure.

—The dead leaves were falling
in the windless garden of the house,
and a perfume of heliotrope
was still floating in the air.

She did not dare to look at me;
I told her we would be married,
—and the tears rolled
from her mournful eyes.