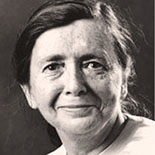 Jennings is known for her lyric poetry and mastery of form. Her work displays a simplicity of metre and rhyme shared with Philip Larkin, Kingsley Amis and Thom Gunn, all members of the group of English poets known as The Movement. She always made it clear that, whilst her life, which included a spell of severe mental illness, contributed to the themes contained within her work, she did not write explicitly autobiographical poetry. Her deeply held Roman Catholicism colored much of her work.

Such love I cannot analyze;
It does not rest in lips or eyes,
Neither in kisses nor caress.
Partly, I know, it’s gentleness
And understanding in one word
Or in brief letters. It’s preserved
By trust and by respect and awe.
These are the words I’m feeling for.
Two people, yes, two lasting friends.
The giving comes, the taking ends
There is no measure for such things.
For this all Nature slows and sings

Lying apart now, each in a separate bed,
He with a book, keeping the light on late,
She like a girl dreaming of childhood,
All men elsewhere—it is as if they wait
Some new event: the book he holds unread,
Her eyes fixed on the shadows overhead.

Tossed up like flotsam from a former passion,
How cool they lie. They hardly ever touch,
Or if they do it is like a confession
Of having little feeling—or too much.
Chastity faces them, a destination
For which their whole lives were a preparation.

Strangely apart, yet strangely together,
Silence between them like a thread to hold
And not wind in. And time itself’s a feather
Touching them gently. Do they know they’re old,
These two who are my father and my mother
Whose fire, from which I came, has now grown cold?