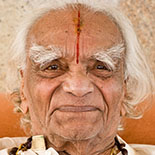 Bellur Krishnamachar Sundararaja Iyengar (December 14, 1918 – August 20, 2014), better known as B.K.S. Iyengar, was the founder of the style of yoga known as “Iyengar Yoga” and was considered one of the foremost yoga teachers in the world.

Iyengar has written many books on yoga practice and philosophy including Light on Yoga, Light on Pranayama, and Light on the Yoga Sutras of Patanjali. Iyengar yoga classes are offered throughout the world. Iyengar was one of the earliest students of Tirumalai Krishnamacharya, who is often referred to as “the father of modern yoga”. He has been credited with popularizing yoga firstly in India and then around the world.