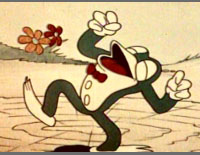 Fiddlesticks is a ground-breaking 1930 animated cartoon film. This was the first animated sound cartoon that was photographed in two-strip Technicolor, and was also Ub Iwerks’s first cartoon since he departed from Walt Disney’s studio.

This film was simultaneously released with King of Jazz, a musical revue, and was released with a cartoon depicting how Paul Whiteman, the music director of the film, “became the King of Jazz”. The animation was made at Lantz Productions.

This is the first film in the Flip the Frog series. The sound system for this film was Powers Cinephone, the same system used for Disney’s Steamboat Willie (1928). The unnamed mouse in the cartoon bears a striking resemblance to Mortimer Mouse, the original concept behind Mickey Mouse, both of whom were first animated by Ub Iwerks.