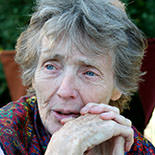 I traveled to the page where scripture meets fiction.
The paper slept but the night in me woke up.

Black letters were now alive
and collectible in a material crawl.

I could not decipher their intentions anymore.
To what end did their shapes come forth?

To seduce or speak truth?

While birds swept over the water
like pot-bellied angels

Up they went to slake their thirst,
drinking from the mist

for the sound of bells seemed to free
as well as hold them.

Then down to scavenge the surf
and eat the innocent.

“I love God and the ferry too,” wrote Kerouac.

Only that which exists can be spoken of.

I wonder, will our imagination
remain a temple burning with candles

against all odds?
Behind a nipple and a bone?

that stirs up imagery
winged and prismed, as if blood

were a wine inducing visions

Some people cry when the characters die.

Then they kill themselves offstage, away from the pages
that they are turning in the night.

Some people sacrifice themselves on a whim
and regret it later on paper.

The one who traveled back to the happy days

clutching a worn novel in her purse . . . ?
A curtain, a knife, adoring eyes?

I watched the children running
and turned to Alyosha for a blessing.

He was sunk in the morass
of rural life

I like to sit with him in the grass.

Then we see the same thing at the same time,
and are one mind.

We two masses, one a book, one a hand.

For they formed a single gesture
of kindness.

It seemed evil to read about people
we would never meet.
We tested their fortitude as if in sleep.
They generally failed the challenge
being strangers in a strange brain.

They were baffled by the tools
handed to them and by the traffic’s direction.
Frankly in a dream or story,
the goal is absolutely hidden
from the one to whom it matters.

Eons of lily-building
emerged in that one flower.
Eons, eons. Pins
and wool, thread and needle,
all material
made of itself and circumstance.

It was a terrible century:
consisting of blasted
oil refineries and stuck ducks,
fish with their lips sealed by plastic
and tar in the hair of cooks.
Filth had penetrated the vents.

who punched in such poor grammar.
First-padded virgins
graduate to this suffering drama
all by her-selves.
Who once were cells.

History is more than just another surmising
grandmother at a window
or a reminiscence twisted in the scrim of translation.

Some long-ago light is pulsating in a trout’s heart
on a laboratory dish.

That light has entered all the holes,
no matter how small, because it is the light that wants to live.

Still waiting for you my sunshine
of justice and mercy.

If west is east of Moscow,
depending where you’re going

then will you ever find me
coming from a northerly direction?

Are you even looking at the earth?
Remember the map is flat but everything else is not.

Is the newest child the oldest body in creation?

Does he carry more information than his mother?

Does her mother, his grandmother, do I seem redundant
by having arrived with less, though first?

Is that why I read at night with my lips compressed?

The fact is, I never knew if anyone felt me
the way Nijinsky knew how to feel.

Or Nastasya. Nothing could shock that woman
who had done so much wrong.

As if trained in a theater, multiple personalities
streamed from her tongue.

This made her an exemplar for our time.

She knew how others felt and became each one,
forgetting who she was before.

I remember her as a child.

Her skirt got tangled up
in a thorn bush when she watched the sky.

Shaking herself free,
she had to see the spiders, ants and dirt
around her skirt,

It was like peering into her own body
and she screamed in horror.

Later, consolation
would be extended by a man dark and handsome:

It came with his semen
(when she wanted hibernation).

She didn’t commit suicide this time, but ran
down Nevsky Prospekt as it began to rain,

and paused to lift her umbrella.
For this moment

we were in our soul a child
rushing home to granny five floors up.

I dropped the book, wept and went to the movies.

It is here where I can forgive someone for his crime.

I can actually forgive it when he is crawling in shit.

Otherwise we will stand on the ferris wheel together forever
stuck in the fog and iron.

I just a witness to his ironic story

He will be a mix between Paul Celan and Oscar Levant
when we are at our happiest
and no forgiveness is asked.

Neurotic, pale, and drawn to the canals,
we will lean over the embankment like sister and brother

who are tempted to be actors.

It is here that his shoes and cat
will converge in the dark. Like fish in a secular city

flipping through sewers for a flash of Christ.