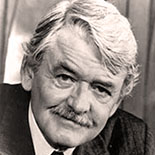 His television roles include Abraham Lincoln in the 1976 TV series Lincoln, Hays Stowe on The Bold Ones: The Senator and Capt. Lloyd Bucher on Pueblo. He is also known for his role in the 2007 film Into the Wild, for which he was nominated for a Screen Actors Guild Award and an Academy Award. He has also performed a one-man show as Mark Twain since 1954.