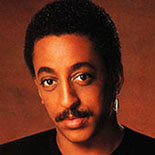 Gregory Hines began tapping when he was two years old, and began dancing semi-professionally at the age of five. Since then, he and his older brother Maurice performed together, studying with choreographer Henry LeTang. Gregory and Maurice also learned from veteran tap dancers such as Howard Sims and The Nicholas Brothers whenever they performed in the same venues. The two brothers were known as “The Hines Kids”, making nightclub appearances, and later as “The Hines Brothers”. When their father joined the act as a drummer, the name changed again in 1963 to “Hines, Hines, and Dad”.