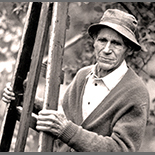 Olav Håkonson Hauge (August 18, 1908– May 23, 1994) best known as Olav H. Hauge, is considered one of the foremost Norwegian poets of the modernist tradition in the 20th century.

He was a gardener and translated many English and American writers into Norwegian.

The rose has been sung about.
I want to sing of the thorns,
and the root–how it grips
the rock hard, hard
as a thin girl’s hand.

IT IS THAT DREAM
Olav H. Hauge