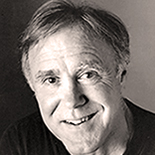 Hass served as Poet Laureate of the United States from 1995 to 1997 and as a Chancellor of The Academy of American Poets from 2001 to 2007. He lives in California with his wife, poet Brenda Hillman, and teaches at the University of California, Berkeley.

PRIVILEGE OF BEING
Robert Hass

Many are making love. Up above, the angels
in the unshaken ether and crystal of human longing
are braiding one another’s hair, which is strawberry blond
and the texture of cold rivers. They glance
down from time to time at the awkward ecstasy—
it must look to them like featherless birds
splashing in the spring puddle of a bed—
and then one woman, she is about to come,
peels back the man’s shut eyelids and says,
look at me, and he does. Or is it the man
tugging the curtain rope in that dark theater?
Anyway, they do, they look at each other;
two beings with evolved eyes, rapacious,
startled, connected at the belly in an unbelievably sweet
lubricious glue, stare at each other,
and the angels are desolate. They hate it. They shudder pathetically
like lithographs of Victorian beggars
with perfect features and alabaster skin hawking rags
in the lewd alleys of the novel.
All of creation is offended by this distress.
It is like the keening sound the moon makes sometimes,
rising. The lovers especially cannot bear it,
it fills them with unspeakable sadness, so that
they close their eyes again and hold each other, each
feeling the mortal singularity of the body
they have enchanted out of death for an hour so,
and one day, running at sunset, the woman says to the man,
I woke up feeling so sad this morning because I realized
that you could not, as much as I love you,
dear heart, cure my loneliness,
wherewith she touched his cheek to reassure him
that she did not mean to hurt him with this truth.
And the man is not hurt exactly,
he understands that life has limits, that people
die young, fail at love,
fail of their ambitions. He runs beside her, he thinks
of the sadness they have gasped and crooned their way out of
coming, clutching each other with old invented
forms of grace and clumsy gratitude, ready
to be alone again, or dissatisfied, or merely
companionable like the couples on the summer beach
reading magazine articles about intimacy between the sexes
to themselves, and to each other,
and to the immense, illiterate, consoling angels.