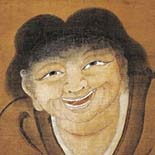 Hanshan (Chinese: Hánshān; lit.: ‘Cold Mountain’, fl. 9th century) is a figure associated with a collection of poems from the Chinese Tang Dynasty in the Taoist and Chan tradition. No one knows who he was, when he lived and died, or whether he actually existed. In the Chinese Buddhist tradition, Hanshan and his sidekick Shide are honored as emanations of the bodhisattvas Mañjuśrī and Samantabhadra, respectively. In Japanese and Chinese paintings, Hanshan is often depicted together with Shide or with Fenggan, another monk with legendary attributes.

Little is known of his work, since he was a recluse living in a remote region and his poems were written on rocks in the mountains he called home. Of the 600 poems he is thought to have written at some point before his death, 313 were collected and have survived. Among the 57 poems attributed to Hanshan’s friend, Shide, seven appear to be authored by Hanshan, for a total of 320.

If you’re climbing Cold Mountain Way,
Cold Mountain Road grows inexhaustible:
long canyons opening across fields of talus,
broad creeks tumbling down mists of grass.
Moss is impossibly slick even without rain,
but this far up, pines need no wind to sing.
Who can leave the world’s tangles behind
and sit with me among these white clouds?