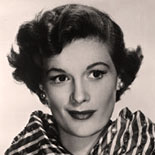 Her film debut was as a femme fatale in Adam’s Rib in 1949. The Asphalt Jungle (1950) provided Hagen with her first starring role beside Sterling Hayden, with excellent reviews. She appeared in the film noir Side Street (1950) playing a gangster’s sincere, but none-too-bright, gun moll. She is arguably best remembered for her comic performance in Singin’ in the Rain as the vain and talentless silent movie star Lina Lamont; Hagen received an Academy Award nomination for Best Supporting Actress.

By 1953, she had joined the cast of the television sitcom Make Room for Daddy. As the first wife of Danny Thomas, Hagen received three Emmy Award nominations, but after three seasons, she grew dissatisfied and left the series. Thomas, who also produced the show, reportedly did not appreciate Jean’s departing the successful series, and her character was killed off rather than recast. This was the first TV character to be killed off in a family sitcom. Marjorie Lord was cast a year later as Danny’s second wife and played opposite Thomas successfully for several seasons. Hagen starred in the 1957 Alfred Hitchcock Presents, Season 3, Episode 7, entitled “Enough Rope for Two”. She appeared as Frida Daniels in The Shaggy Dog starring with Fred MacMurray. In 1960, she appeared as Elizabeth in the episode “Once Upon a Knight” of CBS’s anthology series The DuPont Show with June Allyson.

Although she made frequent guest appearances in various television series, she was unable to successfully resume her film career, and for the remainder of her career she played supporting roles, such as Marguerite LeHand, personal secretary to Franklin Delano Roosevelt in Sunrise at Campobello (1960), as the title character in season 2, episode 3 of The Andy Griffith Show titled “Andy and the Woman Speeder” (1961), and the friend of Bette Davis in Dead Ringer (1964). In the 1960s, Hagen’s health began to decline and she spent many years hospitalized or under medical care.

In 1976, she made a comeback of sorts playing character roles in episodes of the television series Starsky and Hutch and The Streets of San Francisco, and made her final film appearance in the 1977 television movie Alexander: The Other Side of Dawn.