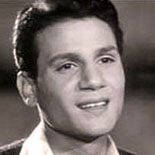 In addition to singing, Halim was also an actor, conductor, business man, music teacher and movie producer. He is considered to be one of the Great Four of Arabic music (along with Umm Kulthum, Mohammed Abdel Wahab, and Farid Al Attrach). His name is sometimes written as ‘Abd el-Halim Hafez. He is known as el-Andaleeb el-Asmar (The Dark-Skinned Nightingale). He is also known as an icon in modern Arabic music. To this day, his music is still enjoyed throughout the Arab world. The 2011 Egyptian revolution was influenced by his songs.