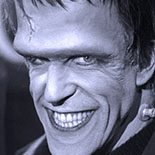 Gwynne was best known for his roles in the 1960s sitcoms Car 54, Where Are You? and as Frankenstein type character Herman Munster in The Munsters, as well as his later roles in Pet Sematary, The Cotton Club and My Cousin Vinny. He was recognized for his distinctive baritone voice.