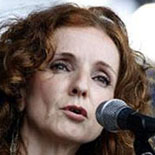 Known for her stripped-down songwriting style centered around the folk music genre, her songs have been covered by a host of musicians including Emmylou Harris, Ellis Paul, Rory Block, and the Dixie Chicks.

In 2007, Griffin was the recipient of the Americana Music Association’s “Artist of the Year” award and her album, Children Running Through, won for “Best Album”. In 2011, Griffin’s album entitled Downtown Church won the Grammy Award for Best Traditional Gospel Album.