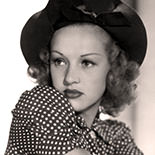 Throughout her career, Grable was a celebrated sex symbol. Her bathing suit poster made her the number-one pin-up girl of World War II, surpassing Rita Hayworth. It was later included in the Life magazine project “100 Photographs that Changed the World”.