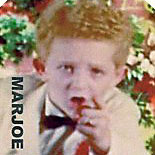 Hugh Marjoe Ross Gortner (generally known as Marjoe Gortner; born January 14, 1944) is a former evangelist preacher and actor. He first gained public attention during the late 1940s when his parents arranged for him at age four to be ordained as a preacher, due to his extraordinary speaking ability; he was the youngest known in that position. As a young man, he preached on the revival circuit.

He became a celebrity during the 1970s when he starred in Marjoe (1972), a behind-the-scenes documentary about the lucrative business of Pentecostal preaching. This won the 1972 Academy Award for Best Documentary Film.