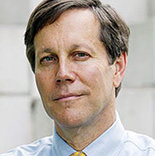 Michael Dana Gioia (born December 24, 1950) is an American poet and critic who retired early from his career as a corporate executive at General Foods to write full-time.

From January 29, 2003, until January 22, 2009, he was chairman of the National Endowment for the Arts, the United States government’s arts agency, and has worked to revitalize an organization that had suffered bitter controversies about the nature of grants to artists in the late 1980s and early 1990s. Gioia has sought to encourage jazz, which he calls the only uniquely American form of art, to promote reading and performance of William Shakespeare and to increase the number of Americans reading literature.

The fireflies court in the sweetgum tree.
The nightjar calls from the pine,
And she seems to say in her rhapsody,
“Oh, mustard-brown Fred, be mine!”
The full moon lights my whiskers afire,
And the fur goes erect on my spine.

I hear the frogs in the muddy lake
Croaking from shore to shore.
They’ve one swift season to soothe their ache.
In autumn they sing no more.
So ignore me now, and you’ll hear my meow
As I scratch all night at the door.

Jacob
never climbed the ladder
burning in his dream. Sleep
pressed him like a stone
in the dust,
and when
he should have risen
like a flame to join
that choir, he was sick
of travelling,
and closed
his eyes to the Seraphim
ascending, unconscious
of the impossible distances
between their steps,
missed
them mount the brilliant
ladder, slowly disappearing
into the scattered light
between the stars,
slept
through it all, a stone
upon a stone pillow,
shivering, Gravity
always greater than desire.