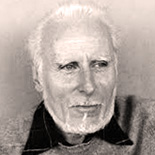 A self-described “serious romantic,” Gilbert had a relationship with poet Linda Gregg, and was later married to sculptor Michiko Nogami, who died after 11 years of marriage. Many of his poems are about these relationships and losses.

Can you understand being alone so long
you would go out in the middle of the night
and put a bucket into the well
so you could feel something down there
tug at the other end of the rope?

Maybe when something stops, something lost in us
can be heard, like the young woman’s voice that
seemed to come from an upstairs screened porch.
There were no lights in the house, nor in the other
houses, almost one o’clock. The muffled sweet
moans changed as she changed from what she was not
into the more she was. The small painting became
the gasping. Never getting loud but growing
ever more evident in the leafy summer street.
Whimpers and keening, a perishing, then nothing.
In the silence, the man outside began to unravel,
maybe altering. Maybe altering more than that.

The boy came home from school and found a hundred lamps
filling the house. Lamps everywhere and all turned on
despite the summer shining in the handsome windows.
Two and three lamps on every table. Lamps in chairs
and on the rugs and even in the kitchen. More lamps
upstairs and on the topmost floor as well. All brightly
burning, until the police came and took them away.
An excess of light that continued in him for a long time.
That radiance of lamps flourishing in the day became
a benchmark for his heart, became a Beaufort scale
for his appetites. The wildness and gladness of it,
the illicitness in him magnified the careful gleam
of Paris mornings when he got to them, and the dark
glisten of the Seine each night as he crossed
the stone bridges back to his room. It was the same
years later as the snow fell through the bruised light
of a winter afternoon and he stood in a narrow street
telling Anna he was leaving. All of it a light beyond
anybody’s ability to manage. The massachussetts sunlight
lies comfortably on the maples. The Pittsburgh lamps
inside of him make it look maybe not good enough.