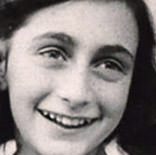 Her wartime diary The Diary of a Young Girl has been the basis for several plays and films. Born in the city of Frankfurt in Weimar Germany, she lived most of her life in or near Amsterdam, in the Netherlands. Born a German national, Frank lost her citizenship in 1941. She gained international fame posthumously after her diary was published. It documents her experiences hiding during the German occupation of the Netherlands in World War II. 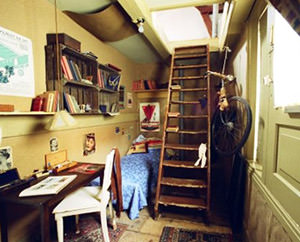 The Frank family moved from Germany to Amsterdam in 1933, the year the Nazis gained control over Germany. By May 1940, they were trapped in Amsterdam by the German occupation of the Netherlands. As persecutions of the Jewish population increased in July 1942, the family went into hiding in some concealed rooms in the building where Anne’s father worked. After two years, the group was betrayed and transported to concentration camps. Anne Frank and her sister, Margot Frank, were eventually transferred to the Bergen-Belsen concentration camp, where they died of typhus in March 1945.

Otto Frank, the only survivor of the family, returned to Amsterdam after the war to find that Anne’s diary had been saved, and his efforts led to its publication in 1947. It has since been translated into many languages. It was translated from its original Dutch and first published in English in 1952 as The Diary of a Young Girl. The blank diary, which was given to Anne on her thirteenth birthday, chronicles her life from June 12, 1942 until August 1, 1944.

Most of Anne’s time was spent reading and studying, and she regularly wrote and edited her diary entries. In addition to providing a narrative of events as they occurred, she wrote about her feelings, beliefs, and ambitions, subjects she felt she could not discuss with anyone. As her confidence in her writing grew, and as she began to mature, she wrote of more abstract subjects such as her belief in God, and how she defined human nature. 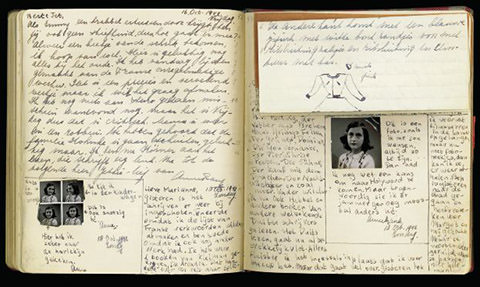 Frank aspired to become a journalist, writing in her diary on Wednesday, 5 April 1944:

I finally realized that I must do my schoolwork to keep from being ignorant, to get on in life, to become a journalist, because that’s what I want! I know I can write …, but it remains to be seen whether I really have talent …

And if I don’t have the talent to write books or newspaper articles, I can always write for myself. But I want to achieve more than that. I can’t imagine living like Mother, Mrs. van Daan and all the women who go about their work and are then forgotten. I need to have something besides a husband and children to devote myself to! …

I want to be useful or bring enjoyment to all people, even those I’ve never met. I want to go on living even after my death! And that’s why I’m so grateful to God for having given me this gift, which I can use to develop myself and to express all that’s inside me!

When I write I can shake off all my cares. My sorrow disappears, my spirits are revived! But, and that’s a big question, will I ever be able to write something great, will I ever become a journalist or a writer?

She continued writing regularly until her last entry of August 1, 1944.

On the morning of August 4, 1944, following a tip from an informer who was never identified, the Achterhuis was stormed by a group of German uniformed police (Grüne Polizei) led by SS-Oberscharführer Karl Silberbauer of the Sicherheitsdienst. The Franks, van Pelses, and Pfeffer were taken to RSHA headquarters, where they were interrogated and held overnight. On August 5, they were transferred to the Huis van Bewaring (House of Detention), an overcrowded prison on the Weteringschans. Two days later they were transported to the Westerbork transit camp, through which by that time more than 100,000 Jews, mostly Dutch and German, had passed. Having been arrested in hiding, they were considered criminals and were sent to the Punishment Barracks for hard labor.

Victor Kugler and Johannes Kleiman were arrested and jailed at the penal camp for enemies of the regime at Amersfoort. Kleiman was released after seven weeks, but Kugler was held in various work camps until the war’s end. Miep Gies and Bep Voskuijl were questioned and threatened by the Security Police but were not detained. They returned to the Achterhuis the following day, and found Anne’s papers strewn on the floor. They collected them, as well as several family photograph albums, and Gies resolved to return them to Anne after the war. On August 7, 1944, Gies attempted to facilitate the release of the prisoners by confronting Silberbauer and offering him money to intervene, but he refused.

On September 3, 1944, the group was deported on what would be the last transport from Westerbork to the Auschwitz concentration camp, and arrived after a three-day journey. On the same train was Bloeme Evers-Emden, an Amsterdam native who had befriended Margot and Anne in the Jewish Lyceum in 1941. Bloeme saw Anne, Margot, and their mother regularly in Auschwitz, and was interviewed for her remembrances of the Frank women in Auschwitz in the 1988 television documentary The Last Seven Months of Anne Frank by Dutch filmmaker Willy Lindwer and the 1995 BBC documentary Anne Frank Remembered.

In the chaos that marked the unloading of the trains, the men were forcibly separated from the women and children, and Otto Frank was wrenched from his family. Of the 1,019 passengers, 549—including all children younger than 15—were sent directly to the gas chambers. Anne Frank had turned 15 three months earlier and was one of the youngest people to be spared from her transport. She was soon made aware that most people were gassed upon arrival, and never learned that the entire group from the Achterhuis had survived this selection. She reasoned that her father, in his mid-fifties and not particularly robust, had been killed immediately after they were separated. 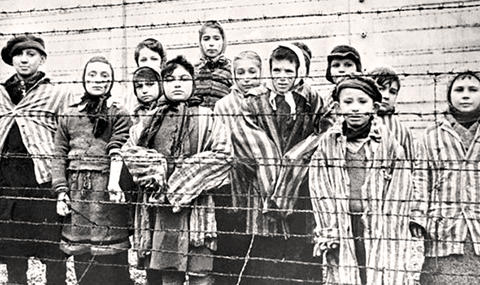 With the other females not selected for immediate death, Frank was forced to strip naked to be disinfected, had her head shaved and was tattooed with an identifying number on her arm. By day, the women were used as slave labor and Frank was forced to haul rocks and dig rolls of sod; by night, they were crammed into overcrowded barracks. Some witnesses later testified Frank became withdrawn and tearful when she saw children being led to the gas chambers; others reported that more often she displayed strength and courage. Her gregarious and confident nature allowed her to obtain extra bread rations for her mother, sister, and herself. Disease was rampant; before long, Frank’s skin became badly infected by scabies. The Frank sisters were moved into an infirmary, which was in a state of constant darkness and infested with rats and mice. Edith Frank stopped eating, saving every morsel of food for her daughters and passing her rations to them through a hole she made at the bottom of the infirmary wall.

In October 1944 the Frank women were slated to join a transport to the Liebau labour camp in Upper Silesia. Bloeme Evers-Emden was slated to be on this transport. But Anne was prohibited from going because she had developed scabies, and her mother and sister opted to stay with her. Bloeme went on without them.

On October 28, selections began for women to be relocated to Bergen-Belsen. More than 8,000 women, including Anne and Margot Frank and Auguste van Pels, were transported. Edith Frank was left behind and later died from starvation. Tents were erected at Bergen-Belsen to accommodate the influx of prisoners, and as the population rose, the death toll due to disease increased rapidly. Frank was briefly reunited with two friends, Hanneli Goslar and Nanette Blitz, who were confined in another section of the camp. Goslar and Blitz survived the war and later discussed the brief conversations they had conducted with Frank through a fence. Blitz described her as bald, emaciated, and shivering. Goslar noted Auguste van Pels was with Anne and Margot Frank, and was caring for Margot, who was severely ill. Neither of them saw Margot, as she was too weak to leave her bunk. Anne told Blitz and Goslar she believed her parents were dead, and for that reason she did not wish to live any longer. Goslar later estimated their meetings had taken place in late January or early February 1945. 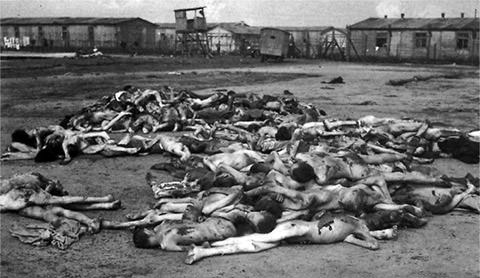 In March 1945 a typhus epidemic spread through the camp, killing 17,000 prisoners. Other diseases, including typhoid fever, were rampant. Due to these chaotic conditions, it is not possible to say what ultimately caused Anne’s death. Witnesses later testified Margot fell from her bunk in her weakened state and was killed by the shock. A few days later, Anne died. This was only a few weeks before the camp was liberated by British troops on April 15, 1945; the exact dates were not recorded. After liberation, the camp was burned in an effort to prevent further spread of disease, and Anne and Margot were buried in a mass grave at an unknown location.

After the war, it was estimated of the 107,000 Jews deported from the Netherlands between 1942 and 1944, only 5,000 survived. An estimated 30,000 Jews remained in the Netherlands, with many people aided by the Dutch underground. Approximately two-thirds of this group survived the war.

Otto Frank survived his internment in Auschwitz. After the war ended, he returned to Amsterdam, where he was sheltered by Jan and Miep Gies as he attempted to locate his family. He learned of the death of his wife, Edith, in Auschwitz, but he remained hopeful that his daughters had survived. After several weeks, he discovered Margot and Anne had also died. He attempted to determine the fates of his daughters’ friends and learned many had been murdered. Susanne ”Sanne” Ledermann, often mentioned in Anne’s diary, had been gassed along with her parents; her sister, Barbara, a close friend of Margot, had survived. Several of the Frank sisters’ school friends had survived, as had the extended families of Otto and Edith Frank, as they had fled Germany during the mid-1930s, with individual family members settling in Switzerland, the United Kingdom, and the United States.

Otto Frank gave the diary to the historian Annie Romein-Verschoor, who tried unsuccessfully to have it published. She then gave it to her husband Jan Romein, who wrote an article about it, titled “Kinderstem” (“A Child’s Voice”), which was published in the newspaper Het Parool on April 3, 1946. He wrote that the diary “stammered out in a child’s voice, embodies all the hideousness of fascism, more so than all the evidence at Nuremberg put together.” His article attracted attention from publishers, and the diary was published in the Netherlands as Het Achterhuis in 1947, followed by a second run in 1950.
It was first published in Germany and France in 1950, and after being rejected by several publishers, was first published in the United Kingdom in 1952. The first American edition, published in 1952 under the title Anne Frank: The Diary of a Young Girl, was positively reviewed. The book was successful in France, Germany, and the United States, but in the United Kingdom it failed to attract an audience and by 1953 was out of print. Its most noteworthy success was in Japan, where it received critical acclaim and sold more than 100,000 copies in its first edition. In Japan, Anne Frank quickly was identified as an important cultural figure who represented the destruction of youth during the war.