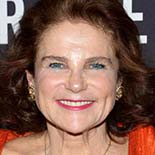 Terri Sue “Tovah” Feldshuh (born December 27, 1953) is an American actress, singer and playwright. She has been a Broadway star for more than four decades, earning four Tony Award nominations. She has also received two Emmy Award nominations for Holocaust and Law & Order, and appeared in such films as A Walk on the Moon, She’s Funny That Way and Kissing Jessica Stein. More recently, she has perhaps become best known for her role as Deanna Monroe on AMC’s television adaptation of The Walking Dead.