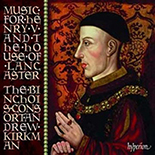 Robert Fayrfax (April 23, 1464 – October 24, 1521) was an English Renaissance composer, considered the most prominent and influential of the reigns of Kings Henry VII and Henry VIII of England.

The Lambeth Choirbook – also known as the Arundel Choirbook – is an illuminated choirbook dating to the sixteenth century. It contains music for 7 Masses, 4 Magnificats, and 8 motets. Much of the music is by Tudor-period composers. The major contributors are Robert Fayrfax and Nicholas Ludford; between them they contributed at least ten of its nineteen pieces. Only three of Fayrfax’s works have his name attached to them, but five other pieces are known as his; these, along with two by Ludford, are known from concordances in the Caius Choirbook and other manuscripts. Seven anonymous pieces exist in the book:

The book is now housed in Lambeth Palace Library under the reference MS 1.

Hail, hope of the world, Mary, hail, meek one, hail, loving one, hail, full of grace
Hail O singular virgin, who wast chosen to not suffer flames through brambles
Hail, beautiful rose, hail, staff of Jesse:
Whose fruit loosened the chains of our weeping
Hail whose womb bore a son against the law of death
Hail, O one lacking comparison, still tearfully renewing joy for the world
Hail, lamp of virgins, through whom the heavenly light shone on these whom shadow holds.
Hail, O virgin from whom a thing of heaven wished to be born, and from whose milk feed.
Hail, gem of the lamps of heaven
Hail, sanctuary of the Holy Ghost
O, how wonderful, and how praiseworthy is this virginity!
In whom, made through the spirit, the paraclete, shone fruitfulness.
O how holy, how serene, how kind, how pleasant the virgin is believed to be!
Through whom slavery is finished, a place of heaven is opened, and liberty is returned.
O, lily of chastity, pray to thy son, who is the salvation of the humble:
Lest we through our fault, in the tearful judgment suffer punishment.
But may she, by her holy prayer, purifying from the dregs of sin, place us in a home of light
Amen let every man say.
—————-