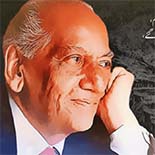 Faiz Ahmad Faiz (February 13, 1911 – November 20, 1984), was a left-wing intellectual, revolutionary poet, and one of the most famous poets of the Urdu language from Pakistan.

A notable member of the Progressive Writers’ Movement, Faiz was an avowed Marxist. Listed four times for the Nobel Prize in poetry, he received the Lenin Peace Prize by the Soviet Union in 1962. Despite being repeatedly accused of atheism by the political and military establishment, Faiz’s poetry suggested a more nuanced relationship with religion in general and with Islam in particular. He was, in fact, greatly inspired by South Asia’s Sufi traditions.

BE NEAR ME
Faiz Ahmed Faiz

Be near me now,
My tormenter, my love, be near me—
At this hour when night comes down,
When, having drunk from the gash of sunset, darkness comes
With the balm of musk in its hands, its diamond lancets,
When it comes with cries of lamentation,
with laughter with songs;
Its blue-gray anklets of pain clinking with every step.
At this hour when hearts, deep in their hiding places,
Have begun to hope once more, when they start their vigil
For hands still enfolded in sleeves;
When wine being poured makes the sound
of inconsolable children
who, though you try with all your heart,
cannot be soothed.
When whatever you want to do cannot be done,
When nothing is of any use;
—At this hour when night comes down,
When night comes, dragging its long face,
dressed in mourning,
Be with me,
My tormenter, my love, be near me.

killed by torture in the Lahore Fort, 1959

Today, all at once, when the thread of my vision snapped,
The sun and moon were smashed to bits in the skies.

Like my heart, no trace of the road of faith remains.
Now, where I stand, there is neither light nor dark.

Now, let someone else tend the garden of sorrow!
Because, friends, in my heart the nourishing dew has dried.

The riot of madness has subsided.
The rain of stones has ended.

And, in the path of the Beloved,
The banner of my blood has been unfurled.

The dust of the road stained red as the mouth of the Beloved;
Let me see who is willing to take my place when I am gone.

“Who else can drain the murderous wine of love?”
The cry heard again on the lips of the Saqi, when I am gone.

This is the way that autumn came to the trees:
it stripped them down to the skin,
left their ebony bodies naked.
It shook out their hearts, the yellow leaves,
scattered them over the ground.
Anyone could trample them out of shape
undisturbed by a single moan of protest.
The birds that herald dreams
were exiled from their song,
each voice torn out of its throat.
They dropped into the dust
even before the hunter strung his bow.
Oh, God of May have mercy.
Bless these withered bodies
with the passion of your resurrection;
make their dead veins flow with blood again.
Give some tree the gift of green again.
Let one bird sing.