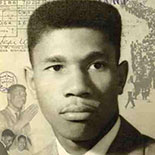 Medgar Wiley Evers (July 2, 1925 – June 12, 1963) was an African-American civil rights activist from Mississippi involved in efforts to overturn segregation at the University of Mississippi.

After returning from overseas military service in World War II and completing his secondary education, he became active in the civil rights movement. He became a field secretary for the NAACP.

Evers was assassinated by Byron De La Beckwith, a member of the White Citizens’ Council. As a veteran, Evers was buried with full military honors at Arlington National Cemetery. His murder and the resulting trials inspired civil rights protests, as well as numerous works of art, music, and film.