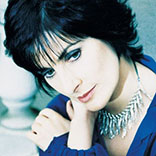 Enya (born Eithne Ní Bhraonáin; anglicised as Enya Brennan; May 17, 1961) is an Irish singer, instrumentalist, and songwriter who is one of Moya Brennan’s younger sisters.

Enya began her musical career in 1980, when she briefly joined her family band Clannad before leaving to perform solo. She gained wider recognition for her music in the 1987 BBC series The Celts. Shortly afterwards, her 1988 album Watermark propelled her to further international fame and she became known for her distinctive sound, characterized by voice-layering, folk melodies, synthesized backdrops and ethereal reverberations. She has performed in 10 languages.

Enya continued to enjoy steady success during the 1990s and 2000s; her 2000 album A Day Without Rain sold 15 million copies, and became the top selling new age album of the 2000s in the US, according to Nielsen SoundScan. She received the world’s best-selling female award at the World Music Awards in 2001. She is Ireland’s best-selling solo musician. Her record sales stand at more than 75 million worldwide, including over 26.5 million in album sales in the US, making her one of the world’s best-selling artists of all time. Her work has earned her four Grammy Awards and an Academy Award nomination.