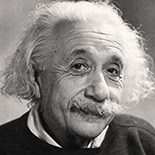 Einstein developed the general theory of relativity, one of the two pillars of modern physics (alongside quantum mechanics). While best known for his mass-energy equivalence formula E = mc2 (which has been dubbed “the world’s most famous equation”), he received the 1921 Nobel Prize in Physics “for his services to theoretical physics, and especially for his discovery of the law of the photoelectric effect”. The latter was pivotal in establishing quantum theory.

RELATIVITY AND THE ‘PHYSICS’ OF LOVE
Albert Einstein

Oh, it should be possible
to explain the laws of physics
to a barmaid! . . .
but how could she ever,
in a million years,
explain love to an Einstein?

All these primary impulses,
not easily described in words,
are the springboards
of man’s actions—because
any man who can drive safely
while kissing a pretty girl
is simply not giving the kiss
the attention it deserves!