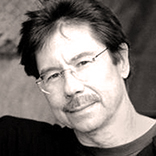 Dybek’s awards include a Lannan Prize, a PEN/Malamud Award (1995), a Whiting Writers’ Award, a Guggenheim, and numerous O. Henry Prizes. On September 25, 2007, Dybek was awarded a MacArthur Fellowship. One day later, he was awarded the 2007 Rea Award for the Short Story, a $30,000 annual prize given for “originality and influence on the genre.” He appears in both The Best American Short Stories and The Best American Poetry series.

The third rail
and the electric chair

are charged with the current
that glows tonight

in the bedside lamp
illuminating your body.