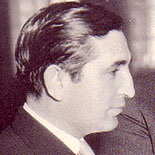 Alexander “Al” Dubin (June 10, 1891 – February 11, 1945) was an American lyricist. He is best known for his collaborations with the composer Harry Warren.

Dubin sold his first set of lyrics for two songs “Prairie Rose” and “Sunray” in 1909 to the Whitmark Music Publishing Firm.

In 1925, Dubin met the composer Harry Warren, who was to become his future collaborator at Warner Bros. studio in Hollywood. The first song they collaborated on was titled, “Too Many Kisses in the Summer Bring Too Many Tears in the Fall.” But it was another song written with Joseph Meyer that same year that became Dubin’s first big hit, “A Cup of Coffee, a Sandwich, and You.”

Warner Brothers purchased the publishing firms of Witmark, Remick and Harms, and since Dubin was under contract to Harms, Warner Brothers inherited his services. In 1929 Dubin wrote Tiptoe Through the Tulips with composer Joe Burke for the film Gold Diggers of Broadway.

In 1932, Dubin teamed officially with composer Harry Warren on the movie musical 42nd Street, starring Ruby Keeler, Dick Powell, Warner Baxter, and Bebe Daniels. With dance routines sequenced by legendary choreographer Busby Berkeley. The songwriting team of Warren and Dubin contributed 4 songs: 42nd Street, “You’re Getting to Be a Habit with Me”, “Young and Healthy”, and Shuffle Off to Buffalo.

Between 1932 and 1939, Dubin and Warren wrote 60 hit songs for several Warner Bros. movie musicals, including Gold Diggers of 1933, Footlight Parade starring James Cagney, Roman Scandals starring Eddie Cantor, Dames, Go Into Your Dance and Wonder Bar, both starring Al Jolson. The song Lullaby of Broadway, which he wrote with Warren for the musical film, Gold Diggers of 1935 won the 1936 Academy Award for Best Original Song.

In 1980, producer David Merrick and director Gower Champion adapted 42nd Street into a Broadway musical that won The Tony Award for Best Musical in 1981. Warren and Dubin wrote the music and lyrics for Broadway’s 42nd Street, with the book being written by Michael Stewart and Mark Bramble.

Dubin was inducted into the Songwriters Hall of Fame in 1970.

“Tiptoe Through the Tulips” is a popular song originally published in 1929. The song was written by Al Dubin (lyrics) and Joe Burke (music).