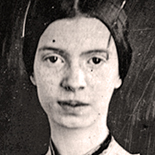 Emily Elizabeth Dickinson (December 10, 1830 – May 15, 1886) was an American poet. Born in Amherst, Massachusetts, to a successful family with strong community ties, she lived a mostly introverted and reclusive life. After she studied at the Amherst Academy for seven years in her youth, she spent a short time at Mount Holyoke Female Seminary before returning to her family’s house in Amherst. Thought of as an eccentric by the locals, she became known for her penchant for white clothing and her reluctance to greet guests or, later in life, even leave her room. Most of her friendships were therefore carried out by correspondence.

While Dickinson was a prolific private poet, fewer than a dozen of her nearly eighteen hundred poems were published during her lifetime. The work that was published during her lifetime was usually altered significantly by the publishers to fit the conventional poetic rules of the time. Dickinson’s poems are unique for the era in which she wrote; they contain short lines, typically lack titles, and often use slant rhyme as well as unconventional capitalization and punctuation. Many of her poems deal with themes of death and immortality, two recurring topics in letters to her friends.

A Light exists in Spring
Not present on the year
At any other period.
When March is scarcely here

Then, as horizons step,
Or moons report away,
Without the formula of sound,
It passes, and we stay:

A quality of loss
Affecting our content,
As trade had suddenly encroached
Upon a sacrament.

BECAUSE I COULD NOT STOP FOR DEATH
Emily Dickinson

Because I could not stop for Death—
He kindly stopped for me—
The Carriage held but just Ourselves—
And Immortality.

We slowly drove—He knew no haste
And I had put away
My labor and my leisure too,
For His Civility—

Or rather—He passed Us—
The Dews drew quivering and chill—
For only Gossamer, my Gown—
My Tippet—only Tulle—

Come slowly—Eden!
Lips unused to Thee—
Bashful—sip thy Jessamines—
As the fainting Bee—

Reaching late his flower,
Round her chamber hums—
Counts his nectars—
Enters—and is lost in Balms.

HOPE IS THE THING WITH FEATHERS
Emily Dickinson

Hope is the thing with feathers
That perches in the soul,
And sings the tune without the words,
And never stops at all,

And sweetest in the gale is heard;
And sore must be the storm
That could abash the little bird
That kept so many warm.

I’ve heard it in the chillest land,
And on the strangest sea;
Yet, never, in extremity,
It asked a crumb of me.

Wild Nights—Wild Nights!
Were I with thee
Wild Nights should be
Our luxury!

Rowing in Eden!
Ah! the Sea!
Might I but moor—Tonight—
in Thee!