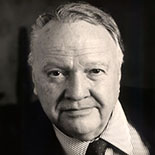 James Lafayette Dickey (February 2, 1923 – January 19, 1997) was an American poet and novelist. He was appointed the eighteenth Poet Laureate Consultant in Poetry to the Library of Congress in 1966. He also received the Order of the South award.

The sea here used to look
As if many convicts had built it,

Standing deep in their ankle chains,
Ankle-deep in the water, to smite

The land and break it down to salt.
I was in this bog as a child

When they were all working all day
To drive the pilings down.

And from it a sea bird be born
To take off over the marshes.

As the gray climbs the side of my head
And cuts my brain off from the world,

I walk and wish mainly for birds,
For the one bird no one has looked for

To spring again from a flash
Of metal, perhaps from the scratched

Wedding band on my ring finger.
Recalling the chains of their feet,

I stand and look out over grasses
At the bridge they built, long abandoned,

Breaking down into water at last,
And long, like them, for freedom

Or death, or to believe again
That they worked on the ocean to give it

The unchanging, hopeless look
Out of which all miracles leap.

I have just come down from my father.
Higher and higher he lies
Above me in a blue light
Shed by a tinted window.
I drop through six white floors
And then step out onto pavement.

Still feeling my father ascend,
I start to cross the firm street,
My shoulder blades shining with all
The glass the huge building can raise.
Now I must turn round and face it,
And know his one pane from the others.

Each window possesses the sun
As though it burned there on a wick.
I wave, like a man catching fire.
All the deep-dyed windowpanes flash,
And, behind them, all the white rooms
They turn to the color of Heaven.

Ceremoniously, gravely, and weakly,
Dozens of pale hands are waving
Back, from inside their flames.
Yet one pure pane among these
Is the bright, erased blankness of nothing.
I know that my father is there,

In the shape of his death still living.
The traffic increases around me
Like a madness called down on my head.
The horns blast at me like shotguns,
And drivers lean out, driven crazy—
But now my propped-up father

Lifts his arm out of stillness at last.
The light from the window strikes me
And I turn as blue as a soul,
As the moment when I was born.
I am not afraid for my father—
Look! He is grinning; he is not

Afraid for my life, either,
As the wild engines stand at my knees
Shredding their gears and roaring,
And I hold each car in its place
For miles, inciting its horn
To blow down the walls of the world

That the dying may float without fear
In the bold blue gaze of my father.
Slowly I move to the sidewalk
With my pin-tingling hand half dead
At the end of my bloodless arm.
I carry it off in amazement,

High, still higher, still waving,
My recognized face fully mortal,
Yet not; not at all, in the pale,
Drained, otherworldly, stricken,
Created hue of stained glass.
I have just come down from my father.