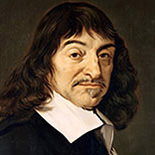 René Descartes (March 31, 1596 – February 11, 1650) was a French philosopher, mathematician, and writer who spent most of his life in the Dutch Republic.

Descartes has been dubbed The Father of Modern Philosophy, and much subsequent Western philosophy is a response to his writings, which are studied closely to this day. In particular, his Meditations on First Philosophy continues to be a standard text at most university philosophy departments.

Descartes’ influence in mathematics is equally apparent; the Cartesian coordinate system — allowing reference to a point in space as a set of numbers, and allowing algebraic equations to be expressed as geometric shapes in a two-dimensional coordinate system (and conversely, shapes to be described as equations) — was named after him. He is credited as the father of analytical geometry, the bridge between algebra and geometry, crucial to the discovery of infinitesimal calculus and analysis. Descartes was also one of the key figures in the scientific revolution and has been described as an example of genius. He refused to accept the authority of previous philosophers and also refused to accept the obviousness of his own senses.

Descartes frequently sets his views apart from those of his predecessors. In the opening section of the Passions of the Soul, a treatise on the early modern version of what are now commonly called emotions, Descartes goes so far as to assert that he will write on this topic “as if no one had written on these matters before”. Many elements of his philosophy have precedents in late Aristotelianism, the revived Stoicism of the 16th century, or in earlier philosophers like Augustine. In his natural philosophy, he differs from the schools on two major points: First, he rejects the splitting of corporeal substance into matter and form; second, he rejects any appeal to final ends—divine or natural—in explaining natural phenomena. In his theology, he insists on the absolute freedom of God’s act of creation.

Descartes laid the foundation for 17th-century continental rationalism, later advocated by Baruch Spinoza and Gottfried Leibniz, and opposed by the empiricist school of thought consisting of Hobbes, Locke, Berkeley, Jean-Jacques Rousseau, and Hume. Leibniz, Spinoza and Descartes were all well versed in mathematics as well as philosophy, and Descartes and Leibniz contributed greatly to science as well.

He is perhaps best known for the philosophical statement “Cogito ergo sum” (French: Je pense, donc je suis; I think, therefore I am), found in part IV of Discourse on the Method (1637 – written in French but with inclusion of “Cogito ergo sum“) and §7 of part I of Principles of Philosophy (1644 – written in Latin).