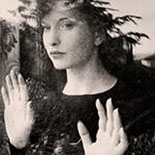 Maya Deren (April 29, 1917 – October 13, 1961), born Eleanora Derenkowskaia, was one of the most important American experimental filmmakers and entrepreneurial promoters of the avant-garde in the 1940s and 1950s. Deren was also a choreographer, dancer, film theorist, poet, lecturer, writer and photographer.

The function of film, Deren believed, like most art forms, was to create an experience; each one of her films would evoke new conclusions, lending her focus to be dynamic and always-evolving. She combined her interests in dance, voodoo and subjective psychology in a series of surreal, perceptual, black and white short films. Using editing, multiple exposures, jump cutting, superimposition, slow-motion and other camera techniques to her fullest advantage, Deren creates continued motion through discontinued space, while abandoning the established notions of physical space and time, with the ability to turn her vision into a stream of consciousness.

Perhaps one of the most influential experimental films in American cinema was her collaboration with Alexander Hammid on Meshes of the Afternoon (1943). She continued to make several more films of her own, including At Land (1944), A Study in Choreography for Camera (1945), and Ritual in Transfigured Time (1946)  – writing, producing, directing, editing, and photographing them with help from only one other person, Hella Heyman, as camerawoman. She also appeared in a few of her films but never credited herself as an actress, downplaying her roles as anonymous figures rather than iconic deities.