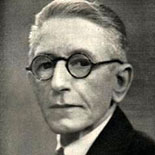 Dennis is known for his humorous poems, especially “The Songs of a Sentimental Bloke”, published in the early 20th century. Though Dennis’s work is less well known today, his 1916 publication of The Sentimental Bloke sold 65,000 copies in its first year, and by 1917 he was the most prosperous poet in Australian history.

Together with Banjo Paterson and Henry Lawson, both of whom he collaborated with, he is often considered among Australia’s three most famous poets. When he died at the age of 61, the Prime Minister of Australia Joseph Lyons suggested he was destined to be remembered as the “Australian Robert Burns”

Now is the healing, quiet hour that fills
This gay, green world with peace and grateful rest.
Where lately over opalescent hills
The blood of slain Day reddened all the west,
Now comes at Night’s behest,
A glow that over all the forest spills,
As with the gold of promised daffodils.
Of all hours this is best.

It is time for thoughts of holy things,
Of half-forgotten friends and one’s own folk.
O’er all, the garden-scented sweetness clings
To mingle with the wood fire’s drifting smoke.
A bull-frog’s startled croak
Sounds from the gully where the last bird sings
His laggard vesper hymn, with folded wings;
And night spreads forth her cloak.

Keeping their vigil where the great range yearns,
Like rigid sentries stand the wise old gums.
On blundering wings a night-moth wheels and turns
And lumbers on, mingling its drowsy hums
With that far roll of drums,
Where the swift creek goes tumbling amidst the ferns…
Now, as the first star in the zenith burns,
The dear, soft darkness comes.

Shout! . . . . . . Shout!
There’s someone round about,
And through the door I see some more
And supper all laid out.
Now, Run! Run! Run!
Oh, we’ve had such splendid fun –
Through the park in the dark,
As brave as anyone.