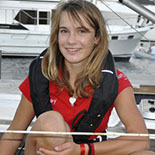 In 2009, she announced her plan to become the youngest person to circumnavigate the globe single-handed.

A Dutch court stepped in, due to the objections of the local authorities, and prevented Dekker from departing while under shared custody of both her parents.