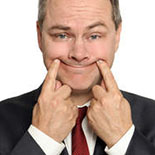 Dee is well known in the United Kingdom for writing and starring in the sitcom Lead Balloon and hosting the panel show I’m Sorry I Haven’t A Clue. He has also been a team captain on Shooting Stars and hosted Jack Dee: Live at the Apollo, which was nominated for a BAFTA in 2006. He also presented The Jack Dee Show, Jack Dee’s Saturday Night and Jack Dee’s Happy Hour. He won Celebrity Big Brother 1 in 2001.