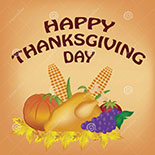 Thanksgiving Day is a national holiday celebrated in Canada and the United States as a day of giving thanks for the blessing of the harvest and of the preceding year. It is celebrated on the second Monday of October in Canada and on the fourth Thursday of November in the United States. Several other places around the world observe similar celebrations. Thanksgiving has its historical roots in religious and cultural traditions and has long been celebrated in a secular manner as well.

United States President Abraham Lincoln proclaimed November 26 as a national Thanksgiving Day, to be celebrated annually on the final Thursday of November. (Since 1941, it has been on the fourth Thursday.)