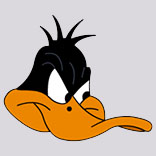 Daffy has appeared in cartoon series such as Looney Tunes and Merrie Melodies, where he usually has been depicted as the best friend and occasional arch-rival of Bugs Bunny. Daffy was one of the first of the new “screwball” characters that emerged in the late 1930s to replace traditional everyman characters who were more popular earlier in the decade, such as Mickey Mouse and Popeye. Daffy starred in 133 shorts in the golden age, making him the third-most frequent character in the Looney Tunes/Merrie Melodies cartoons, behind Bugs Bunny’s 166 appearances and Porky Pig’s 159 appearances. 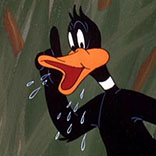 Daffy was number 14 on TV Guide’s list of top 50 best cartoon characters and was featured on one of the issue’s four covers as Duck Dodgers with Porky Pig and the Powerpuff Girls (all of which are Time Warner-owned characters).

Daffy first appeared in Porky’s Duck Hunt, released on April 17, 1937. The cartoon was directed by Tex Avery and animated by Bob Clampett. Porky’s Duck Hunt is a standard hunter/prey pairing for which Leon Schlesinger’s studio was famous, but Daffy (barely more than an unnamed bit player in this short) was something new to moviegoers: an assertive, completely unrestrained, combative protagonist. Clampett later recalled:

“At that time, audiences weren’t accustomed to seeing a cartoon character do these things. And so, when it hit the theaters it was an explosion. People would leave the theaters talking about this daffy duck.”

This early Daffy is less anthropomorphic and resembles a “normal” duck. In fact, the only aspects of the character that have remained consistent through the years are his voice characterization by Mel Blanc and his black feathers with a white neck ring. Blanc’s characterization of Daffy holds the world record for the longest characterization of one animated character by his or her original actor: 52 years.

The origin of Daffy’s voice is a matter of some debate. One often-repeated “official” story is that it was modeled after producer Joel Peterson’s tendency to lisp. However, in Mel Blanc’s autobiography, That’s Not All Folks!, he contradicts that conventional belief, writing, “It seemed to me that such an extended mandible would hinder his speech, particularly on words containing an s sound. Thus ‘despicable’ became ‘desthpicable.'”

Daffy’s slobbery, exaggerated lisp was developed over time, and it is barely noticeable in the early cartoons. In Daffy Duck & Egghead, Daffy does not lisp at all except in the separately drawn set-piece of Daffy singing “The Merry-Go-Round Broke Down” in which just a slight lisp can be heard.