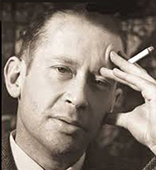 Edward Estlin Cummings (October 14, 1894 – September 3, 1962), known as E. E. Cummings, with the abbreviated form of his name often written by others in lowercase letters as e e cummings (in the style of some of his poems), was an American poet, painter, essayist, author, and playwright.

His body of work encompasses approximately 2,900 poems, two autobiographical novels, four plays and several essays, as well as numerous drawings and paintings. He is remembered as an eminent voice of 20th century English literature.

MAY I FEEL SAID HE
E. E. Cummings

(cccome?said he
ummm said she)
you’re divine!said he
(you are Mine said she)

somewhere i have never traveled, gladly beyond
any experience, your eyes have their silence:
in your most frail gesture are things which enclose me,
or which i cannot touch because they are too near

your slightest look easily will enclose me
though i have closed myself as fingers,
you open always petal by petal myself as Spring opens
(touching skillfully, mysteriously) her first rose

or if your wish be to close me, i and
my life will shut very beautifully, suddenly,
as when the heart of this flower imagines
the snow carefully everywhere descending;

nothing which we are to perceive in this world equals
the power of your intense fragility whose texture
compels me with the color of its countries,
rendering death and forever with each breathing

(i do not know what it is about you that closes
and opens; only something in me understands
the voice of your eyes is deeper than all roses)
nobody, not even the rain, has such small hands