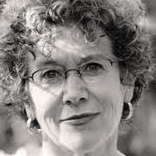 Crozier has authored 15 books which typically focus on human relationships, the natural world, language, and memory and perception.

A PROPHET IN HIS OWN COUNTRY
Lorna Crozier

The gopher on his hind legs
is taut with holiness and fright.
Miniature and beardless,
he could be stoned or flooded out,
burnt alive in stubble fields,
martyr to children for a penny a tail.

How can you not believe an animal
who goes down head first
into darkness, into the ceaseless
pull of gravity beneath him?
What faith that takes!

I come to him with questions
because I love his ears, how perfectly
they fit, how flat they lie against his head.
They hear the inner and the outer
worlds: what rain says
underground. The stone’s praise
for the sparrow’s ankle bone.

Little earth-otter, little dusty Lazarus,
he vanishes, he rises. He won’t tell us
what he’s seen.

Leaves flood the yard
in deep shadows. Gourds
float like jellyfish
in the night’s tidal pools.

This far from the ocean
only plants know
such darkness.

Even the earthworm
pulls threads of light
through the blackest corner,
the sleeping eye.

ON BACH’S CELLO SUITE NO. 2 IN D MINOR
Lorna Crozier

Lacking the violin’s higher reasoning,
its closeness to the mind, the cello
without touching, knows the lower body
best, the shame and glory of the belly,
the bowels, the inner thighs,
the sweat and stain of things, holy and otherwise,
— this, the cello’s music, the dark vibratos,
the pitch and muscle of their sounds.

Who wants to hear about
two old farts getting it on
in the back seat of a Buick,
in the garden shed among vermiculite,
in the kitchen where we should be drinking
ovaltine and saying no? Who wants to hear
about 26 years of screwing,
our once-not-unattractive flesh
now loose as unbaked pizza dough
hanging between two hands before it’s tossed?

Who wants to hear about two old lovers
slapping together like water hitting mud,
hair where there shouldn’t be
and little where there should,
my bunioned foot sliding
up your bony calf, your calloused hands
sinking in the quickslide of my belly,
our faithless bums crepitus, collapsed?

We have to wear our glasses to see down there!

Who wants to know when we get it going
we’re revved up, like the first time — honest —
like the first time, if only we could remember it.
our old bodies doing what you know
bodies do, worn and beautiful and shameless.

The strawlike strands of grass are frosted
only on one side, but the thorn
of the wild rose is feathered all around,
even on its tip, a soft flared tuft.

The task: to see clearly
so that even the ear becomes a kind of eye
taking you beyond the small circle
of your sight — even the mouth —
magpie, magpie over the southern hill.

In the grove, birches move in and out of snow
as if the wind were made of wheels and pulleys,
trees dropping from the sky so suddenly
you gasp and fog your glasses.

Instead of shadows there are streaks of gold!

Don’t think the snow can’t see you
reeling in the light.

It was the wild ones you loved the best,
the boys who sat surly at the front
where every teacher moved them,
the ones who finished midterms
first, who showed up late,
then never showed at all.

Under the glare of outdoors lights
you watched them bang
their hard bodies against the boards,
gloves and sticks flying.
In the cold they looked back at you
through stitched and swollen eyes,
smiled crookedly to hide
their missing teeth,
breathed through noses broken
in a game or pool-hall fight.
There was always someone older,
a fist and grin
they just couldn’t walk away from,
there was always some girl, watching.

They were the first boys you knew
who owned a car, who rolled
a thin white paper, who talked
out of the side of their mouths,
cigarettes burning.
You watched them fall
quick and bright and beautiful
off the highest diving boards,
you watched them disappear
then throw themselves on top of you
till you thought you’d drown.

Oh, they were cool and mean,
but sometimes they treated you
with such extravagant tenderness,
giving you a rhinestone broach
they’d nicked from Woolworth’s,
a fuzzy pink angora, giving up
their jackets on an autumn night
to keep you warm. How you loved
to move inside the shape of them,
the smell of sweat and leather
kissing your skin. For months
you wore their hockey rings
wound with gauze and tape
as if one day
you’d need to bind a wound.

The wild boys had the fastest
tongues, the dirtiest jokes,
and told anyone who’d listen
what they’d done to a girl
the night before
though in the narrow darkness
of a car or on a blanket
by the dam where eels slid
just beneath the surface, you knew
you did it to each other
and the words they said were sweet.

The boys you loved
knew everything, guided your mouth
and hands, showed you what you really
wanted from this life. Now,
it is their brokenness
you long to touch, the parts
they left behind or lost

as they learned too soon
too many years ago
what it took and took
to be a man.