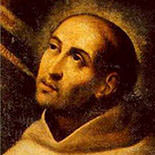 John of the Cross was a reformer of the Carmelite Order and is considered, along with Saint Teresa of Ávila, as a founder of the Discalced Carmelites. He is also known for his writings. Both his poetry and his studies on the growth of the soul are considered the summit of mystical Spanish literature and one of the peaks of all Spanish literature. He was canonized as a saint in 1726 by Pope Benedict XIII. He is one of the thirty-five Doctors of the Church.

THE DARK NIGHT
St. John of the Cross

In the delicious night,
In privacy, where no one saw me,
Nor did I see one thing,
I had no light or guide
But the fire that burned inside my chest.

That fire showed me
The way more clearly than the blaze of the moon
To where, waiting for me,
Was the One I knew so well.
In that place where no one ever is.

In my chest full of flowers,
Flowering wholly and only for Him,
There He remained sleeping;
I cared for Him there,
And he fan of the high cedars cooled Him.

The wind played with
His hair, and that wind from the high
Towers struck me on the neck
With its sober hand;
Sight, taste, touch, hearing stopped.

I stood still. I forgot who I was,
My face leaning against Him,
Everything stopped, abandoned me,
My worldliness was gone, forgotten
Among the white lilies.

Previous
Next
More John of the Cross