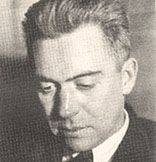 Finding both inspiration and provocation in the poetry of T. S. Eliot, Crane wrote modernist poetry that was difficult, highly stylized, and ambitious in its scope. In his most ambitious work, The Bridge, Crane sought to write an epic poem, in the vein of The Waste Land, that expressed a more optimistic view of modern, urban culture than the one that he found in Eliot’s work. In the years following his suicide at the age of 32, Crane has been hailed by playwrights, poets, and literary critics alike (including Robert Lowell, Derek Walcott, Tennessee Williams, and Harold Bloom), as being one of the most influential poets of his generation.

Harold Hart Crane was a highly anxious and volatile child. He began writing verse in his early teenage years, and though he never attended college, read regularly on his own. His father, a candy manufacturer, attempted to dissuade him from a career in poetry, but Crane was determined to follow his passion to write. Like Eliot, Crane used the landscape of the modern, industrialized city to create a powerful new symbolic literature.

We make our meek adjustments,
Contented with such random consolations
As the wind deposits
In slithered and too ample pockets.

For we can still love the world, who find
A famished kitten on the step, and know
Recesses for it from the fury of the street,
Or warm torn elbow coverts.

We will sidestep, and to the final smirk
Dally the doom of that inevitable thumb
That slowly chafes its puckered index toward us,
Facing the dull squint with what innocence
And what surprise!

And yet these fine collapses are not lies
More than the pirouettes of any pliant cane;
Our obsequies are, in a way, no enterprise.
We can evade you, and all else but the heart:
What blame to us if the heart live on.

The game enforces smirks; but we have seen
The moon in lonely alleys make
A grail of laughter of an empty ash can,
And through all sound of gaiety and quest
Have heard a kitten in the wilderness.

My hands have not touched pleasure since your hands, —
No, — nor my lips freed laughter since ‘farewell’,
And with the day, distance again expands
Voiceless between us, as an uncoiled shell.

Yet, love endures, though starving and alone.
A dove’s wings clung about my heart each night
With surging gentleness, and the blue stone
Set in the tryst-ring has but worn more bright.

Above the fresh ruffles of the surf
Bright striped urchins flay each other with sand.
They have contrived a conquest for shell shucks,
And their fingers crumble fragments of baked weed
Gaily digging and scattering.

And in answer to their treble interjections
The sun beats lightning on the waves,
The waves fold thunder on the sand;
And could they hear me I would tell them:

O brilliant kids, frisk with your dog,
Fondle your shells and sticks, bleached
By time and the elements; but there is a line
You must not cross nor ever trust beyond it
Spry cordage of your bodies to caresses
Too lichen-faithful from too wide a breast.
The bottom of the sea is cruel.

—And yet this great wink of eternity,
Of rimless floods, unfettered leewardings,
Samite sheeted and processioned where
Her undinal vast belly moonward bends,
Laughing the wrapt inflections of our love;

Take this Sea, whose diapason knells
On scrolls of silver snowy sentences,
The sceptred terror of whose sessions rends
As her demeanors motion well or ill,
All but the pieties of lovers’ hands.

And onward, as bells off San Salvador
Salute the crocus lustres of the stars,
In these poinsettia meadows of her tides,—
Adagios of islands, O my Prodigal,
Complete the dark confessions her veins spell.

Mark how her turning shoulders wind the hours,
And hasten while her penniless rich palms
Pass superscription of bent foam and wave,—
Hasten, while they are true,—sleep, death, desire,
Close round one instant in one floating flower.

Bind us in time, O Seasons clear, and awe.
O minstrel galleons of Carib fire,
Bequeath us to no earthly shore until
Is answered in the vortex of our grave
The seal’s wide spindrift gaze toward paradise.

Infinite consanguinity it bears—
This tendered theme of you that light
Retrieves from sea plains where the sky
Resigns a breast that every wave enthrones;
While ribboned water lanes I wind
Are laved and scattered with no stroke
Wide from your side, whereto this hour
The sea lifts, also, reliquary hands.

And so, admitted through black swollen gates
That must arrest all distance otherwise,—
Past whirling pillars and lithe pediments,
Light wrestling there incessantly with light,
Star kissing star through wave on wave unto
Your body rocking!
and where death, if shed,
Presumes no carnage, but this single change,—
Upon the steep floor flung from dawn to dawn
The silken skilled transmemberment of song;

Permit me voyage, love, into your hands …

Whose counted smile of hours and days, suppose
I know as spectrum of the sea and pledge
Vastly now parting gulf on gulf of wings
Whose circles bridge, I know, (from palms to the severe
Chilled albatross’s white immutability)
No stream of greater love advancing now
Than, singing, this mortality alone
Through clay aflow immortally to you.

All fragrance irrefragably, and claim
Madly meeting logically in this hour
And region that is ours to wreathe again,
Portending eyes and lips and making told
The chancel port and portion of our June—

Shall they not stem and close in our own steps
Bright staves of flowers and quills today as I
Must first be lost in fatal tides to tell?

In signature of the incarnate word
The harbor shoulders to resign in mingling
Mutual blood, transpiring as foreknown
And widening noon within your breast for gathering
All bright insinuations that my years have caught
For islands where must lead inviolably
Blue latitudes and levels of your eyes,—

In this expectant, still exclaim receive
The secret oar and petals of all love.

Meticulous, past midnight in clear rime,
Infrangible and lonely, smooth as though cast
Together in one merciless white blade—
The bay estuaries fleck the hard sky limits.

—As if too brittle or too clear to touch!
The cables of our sleep so swiftly filed,
Already hang, shred ends from remembered stars.
One frozen trackless smile … What words
Can strangle this deaf moonlight? For we

Are overtaken. Now no cry, no sword
Can fasten or deflect this tidal wedge,
Slow tyranny of moonlight, moonlight loved
And changed … “There’s

Nothing like this in the world,” you say,
Knowing I cannot touch your hand and look
Too, into that godless cleft of sky
Where nothing turns but dead sands flashing.

“—And never to quite understand!” No,
In all the argosy of your bright hair I dreamed
Nothing so flagless as this piracy.

But now
Draw in your head, alone and too tall here.
Your eyes already in the slant of drifting foam;
Your breath sealed by the ghosts I do not know:
Draw in your head and sleep the long way home.

Steadily as a shell secretes
Its beating leagues of monotone,
Or as many waters trough the sun’s
Red kelson past the cape’s wet stone;

O rivers mingling toward the sky
And harbor of the phoenix’ breast—
My eyes pressed black against the prow,
—Thy derelict and blinded guest

Waiting, afire, what name, unspoke,
I cannot claim: let thy waves rear
More savage than the death of kings,
Some splintered garland for the seer.

Beyond siroccos harvesting
The solstice thunders, crept away,
Like a cliff swinging or a sail
Flung into April’s inmost day—

The imaged Word, it is, that holds
Hushed willows anchored in its glow.
It is the unbetrayable reply
Whose accent no farewell can know.