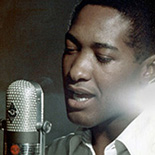 Samuel Cook (January 22, 1931 – December 11, 1964), known by his stage name Sam Cooke, was an American gospel, R&B, soul, and pop singer, songwriter, and entrepreneur. He is considered to be one of the pioneers and founders of soul music.He is commonly known as the King of Soul for his distinctive vocal abilities and influence on the modern world of music. His contribution in pioneering soul music led to the rise of Aretha Franklin, Bobby Womack, Al Green, Curtis Mayfield, Stevie Wonder, Marvin Gaye, and popularized the likes of Otis Redding and James Brown.

Cooke had 30 U.S. top 40 hits between 1957 and 1964, and a further three after his death. Major hits like “You Send Me”, “A Change Is Gonna Come”, “Cupid”, “Chain Gang”, “Wonderful World”, and “Twistin’ the Night Away” are some of his most popular songs. Cooke was also among the first modern black performers and composers to attend to the business side of his musical career. He founded both a record label and a publishing company as an extension of his careers as a singer and composer. He also took an active part in the African-American Civil Rights Movement.

STAND BY ME FATHER
Lyrics by Sam Cooke

Oh, Father You’ve been my friend
Now that I’m in trouble
Stand by me to the end, oh, oh
I want You to stand by, stand by

Well, all of my money and my friends are gone
God, I’m in a mean world
And I’m so all alone, oh, oh
I need You Jesus, stand by, stand by

Well, they tell me that
Samson killed in ancient times
I know that You helped
Him kill 10,000 Philistines, oh
Whoa I need You, stand by, stand by

Here’s another thing
They tell me that they put Daniel
Down in the lion’s den
I know You went down there, Father

You feed Daniel once again
That’s why I said
Do me like You did Daniel
And stand by, stand by

Well, sometimes I feel like
The weight of the world is on my shoulders
And it’s all in vain
When I begin to feel weak along the way
You come and You give me strength again

The Hebrew children have been in fire
Ten times hotter that it ought to be
Just like You delivered them, Father
I know You can deliver me, oh Lord
I’m calling You Jesus, stand by, stand by

When I’m sick, Father, stand by
When they doctor walk away from my bedside
Stand by me father
When it seem like I don’t have a friend
I wonder would You be my friend
Stand closer, stand by