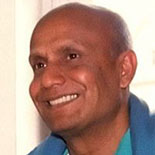 Chinmoy Kumar Ghose, better known as Sri Chinmoy (August 27, 1931 – October 11, 2007), was an Indian spiritual master who taught meditation in the West after moving to New York City in 1964.

Chinmoy established his first meditation center in Queens, New York, and eventually had thousands of students in 60 countries. A prolific author, artist, poet, and musician, he also held public events such as concerts and meditations on the theme of inner peace. Chinmoy also advocated athleticism to achieve spiritual enlightenment, including distance running, swimming, and weightlifting. He organized marathons and other races, and was an active runner and, following a knee injury, weightlifter.