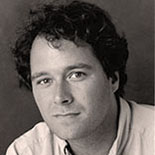 Dan Chiasson (born May 9, 1971) is an American poet and critic. He is the poetry critic for The New Yorker, as well as a regular contributor to The New York Review of Books. He is advisory editor of the Paris Review.

There is one mind in all of us, one soul,
who parches the soil in some nations

but in others hides perpetually behind a veil;
he spills light everywhere, here he spilled

some on my tie, but it dried before dinner ended.
He is in charge of darkness also, also

He makes the stars disappear, but he makes
small stars everywhere, on the hoods of cars,

in the compound eyes of skyscrapers or in the eyes
of sighing lovers bored with one another.

Onto the surface of the world he stamps
all plants and animals. They are not gods

but he made us worshippers of every
bramble toad, black chive, we find.

In Idaho there is a desert cricket that makes
a clocklike tick-tick when he flies, but he

is not a god. The only god is the sun,
our mind—master of all crickets and clocks.