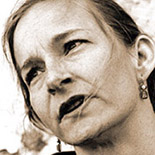 I was conceived in the cruelest month
in whatever spring California could muster.
A little rain—with some more likely.
And the buckeyes were they yet on the ground?
Damn my father’s smooth stone eyes,
other prevailing enticements and what Eliot called
the female stench. Damn the oaks,
their histrionics, struggling in the fog.
Spiderwebs lay in the grass, misted
and looking like misspent galaxies.
I cry into and out of this moment.
Pound told Eliot: strike this and this.
What was weak got dropped, and the poem
stood stronger without it.

THE HEN SWALLOWS A WORM OR SLUG
A. V. Christie

We scratch at the backyard together
through leaf mold, worm casings she kicks off
in a fan behind her. I use a stick
to dig, to find for her what she’s shown me
near the roots, at the edge of a step—sticky
slug on the underside of a hosta’s leaf.
How complicated she is and how resigned.
Between her beak and my outstretched hand,
the worm’s writhing. Then the long slick going
down. It fills the throat, like all that’s swallowed.
Her head chucks it back,
for the worm again dark.
The hen’s pupil dilates.
She wends and follows.

Her queries, sighs, low gurgles, the hastening
click of her nails on pavement then hungry
again into the grass. Grubs are larger
than pale yellow larvae I prize from inside
chestnuts. These mucousy blind wanderers
she eats right from my palm. Nevertheless I am
repulsed by my husband’s embrace. I turn
now from his thick belly, breasts, his interests.
A body I had clambered over, loved.
I scrabble, struggle. I cover myself.
Another sticky truth dug up
that I must re-bury—
sorry on hands and knees,
hungry and wary.